How to Perform Various Rotor Analyses in the COMSOL® Software 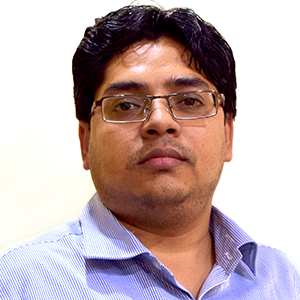 Vibration in rotating machinery is very sensitive to the geometric, structural, and inertial properties of the various rotating and stationary components interacting with each other. These properties include the location of the mounted components and their inertial properties, bearing characteristics, and shaft properties. To understand the effects of these parameters, start with a simple model and perform various analyses to correlate the rotor response within the same model. Let’s demonstrate this process with a simply supported beam rotor example.

The rotor system in this example is a simple rotor with a uniform cross section throughout its length. It is supported at both ends by bearings and there are three mounted components called disks at different locations of the rotor.

For more information about the geometric properties and model setup, check out the references in the model documentation.

Geometry of the beam rotor example.

Two types of analyses are commonly used to study rotor vibration characteristics: eigenfrequency and time-domain analyses. As mentioned in a previous blog post, critical speeds of the rotor strongly depend on the rotor’s angular speed. Therefore, while performing the eigenfrequency analysis, you need to consider the variation in the rotor speed to get the correct critical speeds. A time-domain analysis is performed when you want to look at the system response under time-varying excitation.

Now, let’s look at what type of information each analysis provides as well as the steps involved to perform these analyses.

Eigenfrequency Analysis of a Rotor

Eigenfrequency analysis is used to determine the natural frequencies of a system. In a rotordynamics scenario, this analysis can be used in two different ways.

Consider the first case, in which the operating speed of the system is not fixed, to understand the analysis steps. In this case, you need to perform a parametric eigenfrequency analysis for the angular speed of the rotor. This requires two steps in the Study node: Parametric Sweep and Step 1: Eigenfrequency, shown below on the left. Settings for the Parametric Sweep node for a sweep over a parameter Ow representing the angular speed of the rotor are shown below in the center. This parameter is used as an input in the Rotor Speed section of the Beam Rotor node settings, shown below on the right.

After performing the analysis, you get a whirl plot of the rotor as the default, shown below. The whirl plot shows the whirling orbit and the deformed shape of the rotor for the given rpm and natural frequency combinations. 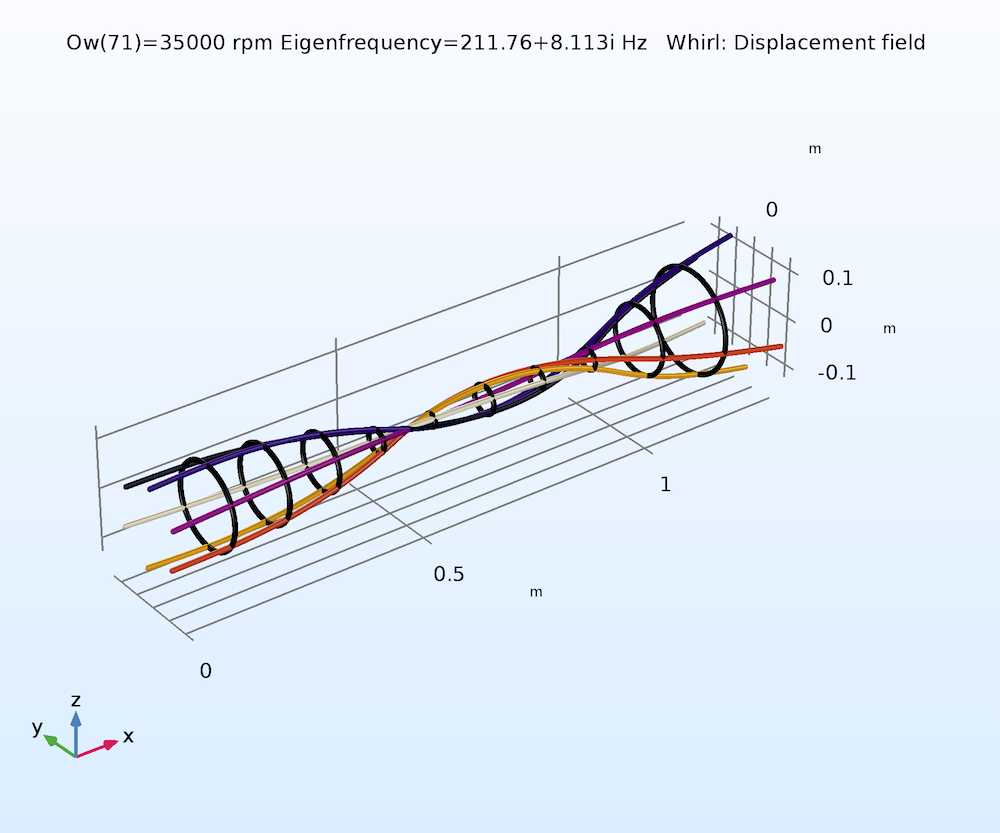 Whirl plot of the rotor.

The deformed shape of the rotor also gives you an idea of how strongly the natural frequency will depend on the angular speed of the rotor. If the disks move away from the rotation axis without significant tilting, then the split in the frequency in the backward whirl (opposite to the spin) and forward whirl (same direction as the spin) is not significant. Alternatively, if the disks do not move significantly far from the rotation axis and rather have significant tilting, then the split in the frequency of the backward and forward whirl is noticeable.

To understand this concept in depth, you can plot the variation of the natural frequency for different modes against the angular speed of the rotor, which is often called a Campbell diagram. The Campbell plot for the simply supported rotor example is shown below. You can see the strong divergence of the eigenfrequencies with rotor speed for certain modes; whereas for others, particularly the modes with low natural frequencies, the divergence is not significant. If you look at the mode shapes corresponding to these frequencies, they confirm the behavior previously discussed. Critical speeds of the rotor can be obtained from the Campbell plot by looking at the intersection of the natural frequency vs. angular speed curve with ω = Ω curve. These are the speeds near which a rotor should not be operated, unless sufficiently damped. 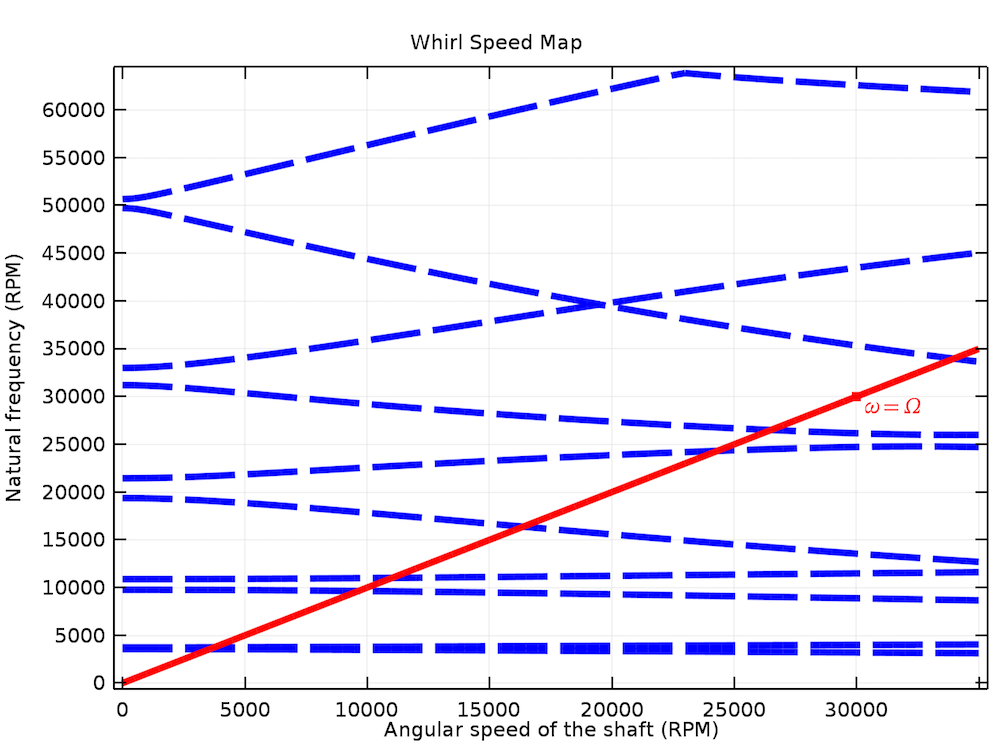 where A(t) is a time-varying response and ω is the complex eigenfrequency of the system. T is the time period given by T = \frac{2\pi}{\Re(\omega)}. 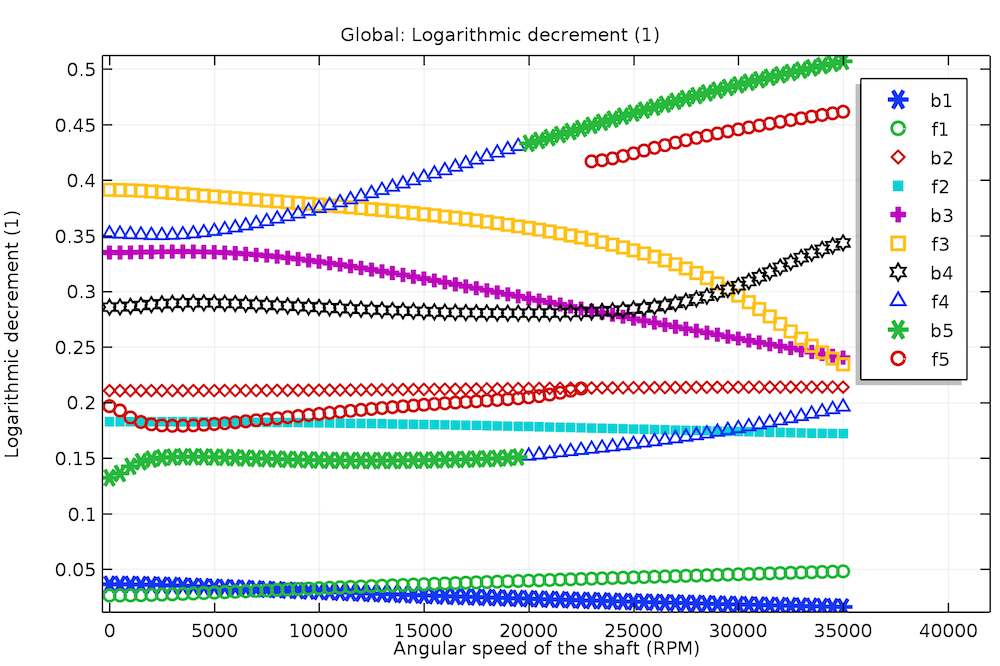 In the plot above, you can see a logarithmic decrement variation for the different bending modes with the angular speed for the simply supported rotor. The notation ‘b’ and ‘f’ is used for the backward and forward whirl modes, respectively. A logarithmic decrement of zero means that the system is undamped, a negative value indicates an unstable system, and a positive value indicates a stable system.

Time-Dependent Analysis of a Rotor

Eigenfrequency analysis gives the characteristics of the rotor system operating at steady state. However, before and after reaching the steady state, during the run-up and run-down, the angular speed of the rotor varies with time. In certain cases, the operating speed might be above the first few natural frequencies of the rotor. Therefore, during the run-up and run-down, the rotor will cross over the corresponding critical speeds. Also, there could be nonharmonic time-varying external excitation acting on the rotor. In such cases, the rotor response cannot be completely determined by an eigenfrequency or frequency-domain analysis. Rather, you need a time-dependent simulation to study the response of the system.

In the eigenfrequency analysis, bearings are modeled using constant stiffness and damping coefficients. However, in reality, these coefficients are strongly dependent on the journal motion. To highlight the effect of the nonlinearity for the time-domain analysis, a plain journal bearing model is used instead of the constant bearing coefficients. A plain journal bearing model is based on the analytical solution of the Reynolds equation for a short bearing approximation. The system in this case is self-excited due to the eccentric mounting modeled as a disk. To simplify the system, only the second disk is considered with small eccentricity in the local y direction.

The waterfall plot of the z-component of the displacement is shown in the figure below. You can observe three peaks clearly in the spectrum. The third peak, which falls along the ω = Ω curve, corresponds to a 1X synchronous whirl. This is in response to the centrifugal force due to eccentricity changing its direction with the rotation of the shaft. Other peaks correspond to the orbiting of the rotor due to the complex rotor bearing interaction. The reason is that the forces from the pressure distribution around the journal in the bearing have a cross-coupling effect with the journal motion. In other words, the motion of the journal in one of the lateral directions induces a component of the force in the lateral direction perpendicular to it. The effect of this phenomenon is a net force acting on the rotor in the direction of the forward whirl. This causes the subsynchronous orbiting of the rotor. 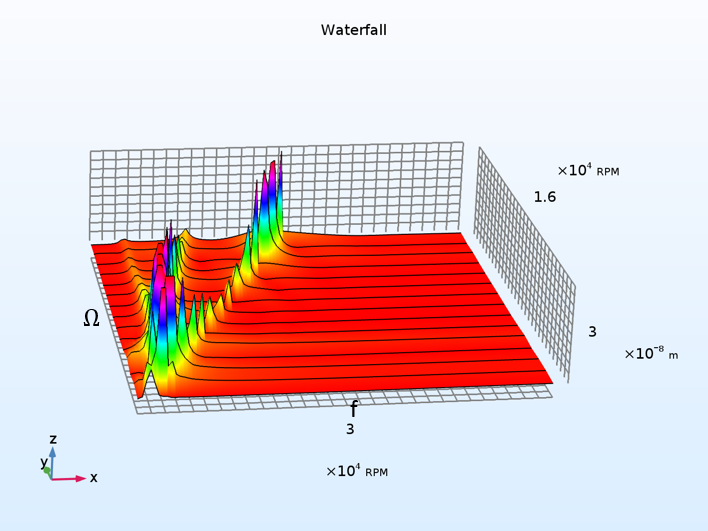 A waterfall plot shows the response amplitude vs. the angular speed and frequency of the rotor.

The orbit of the different locations along the length of the rotor at 30,000 rpm is shown below. The orbit curve changes its color from green to red with time. You can see that after the initial transient phase, the rotor undergoes a forward circular whirl in the steady state. Also, the second bending mode has the highest participation in the response. 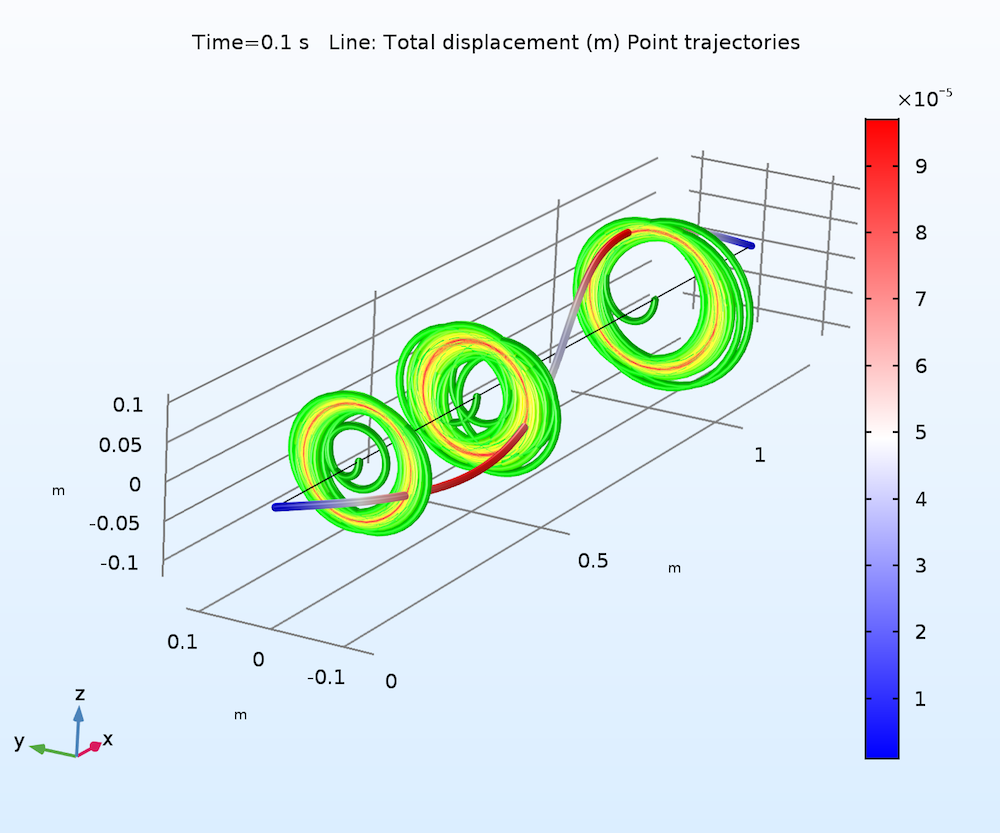 Orbit of the rotor at different locations. The plot changes from green to red with time.

The time variation of the z-direction displacement of a point on the rotor at 30,000 rpm is shown below. Apart from the high-frequency variation, there is also a low-frequency component that envelops the response, but gets damped out with time. 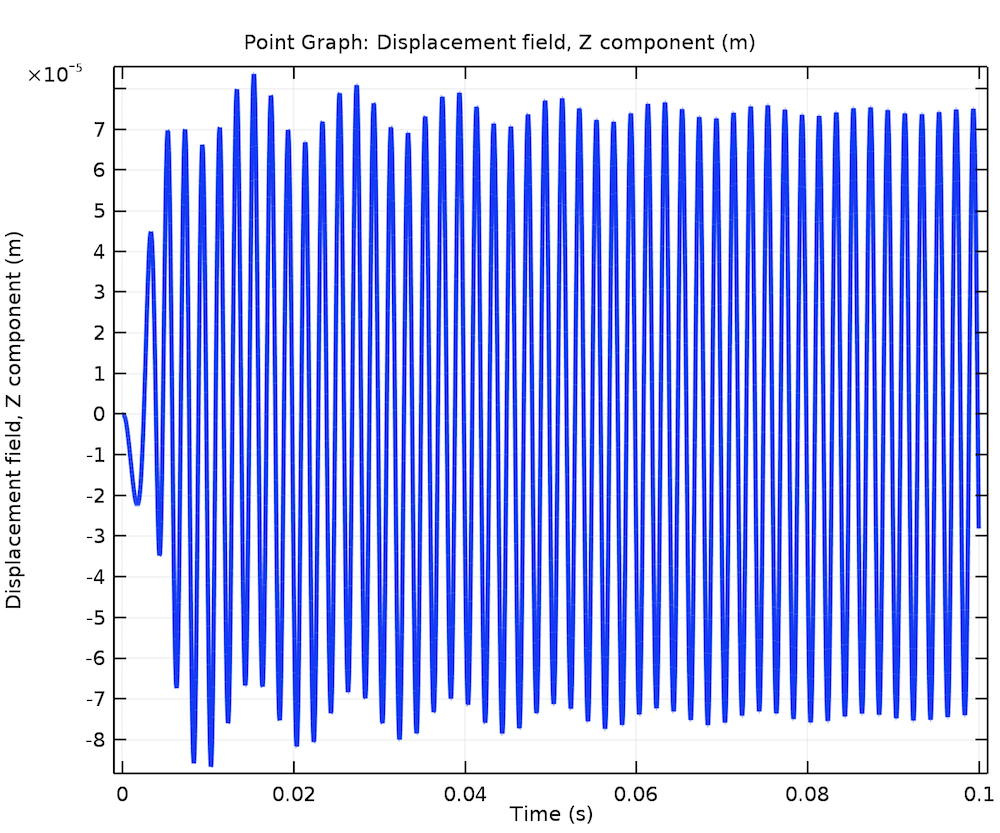 Time variation of the z-displacement.

With this tutorial model, we have demonstrated the approach to set up different analyses in a rotor system, as well as how to plot and analyze the simulation results. Ready to give this tutorial a try? Simply click on the button below to access the MPH-file via the Application Gallery or open it via the Application Library in the COMSOL® software.

How to Model Fundamental Sources in Enclosed Spaces 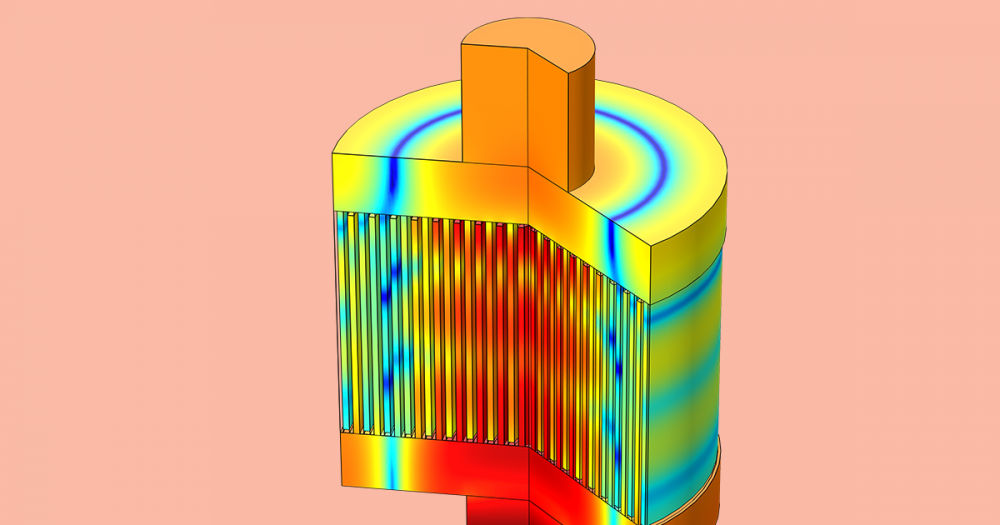 Analyzing the Acoustics in a Simplified Particulate Filter Model

How to Perform a Sensitivity Analysis in COMSOL Multiphysics®