When you hear the name Samsung, you probably think of smartphones and televisions. However, Samsung has had a goal to be the number one audio company, too. To do so, Allan Devantier, head of acoustics at Samsung Research America, built the Samsung Audio Lab in California from the ground up. He assembled a team of engineers specializing in transducers, digital sound processing (DSP), acoustics, programming, and more — but there was still a missing piece to the puzzle…

Ask an audiophile if they prefer mono or stereo systems and they’ll bend your ear for the better part of a day. Without getting into the details, a mono system has only one channel, limiting its capabilities, whereas a stereo system has multiple channels that can playback multiple sources in parallel through multiple speakers, producing a better sound experience. We can use a similar analogy to describe the loudspeaker development process.

“Mono” development entails designing a loudspeaker using only one channel, whether that “channel” is:

On the other hand, a “stereo” loudspeaker development process involves multiple interconnected sources working in parallel: 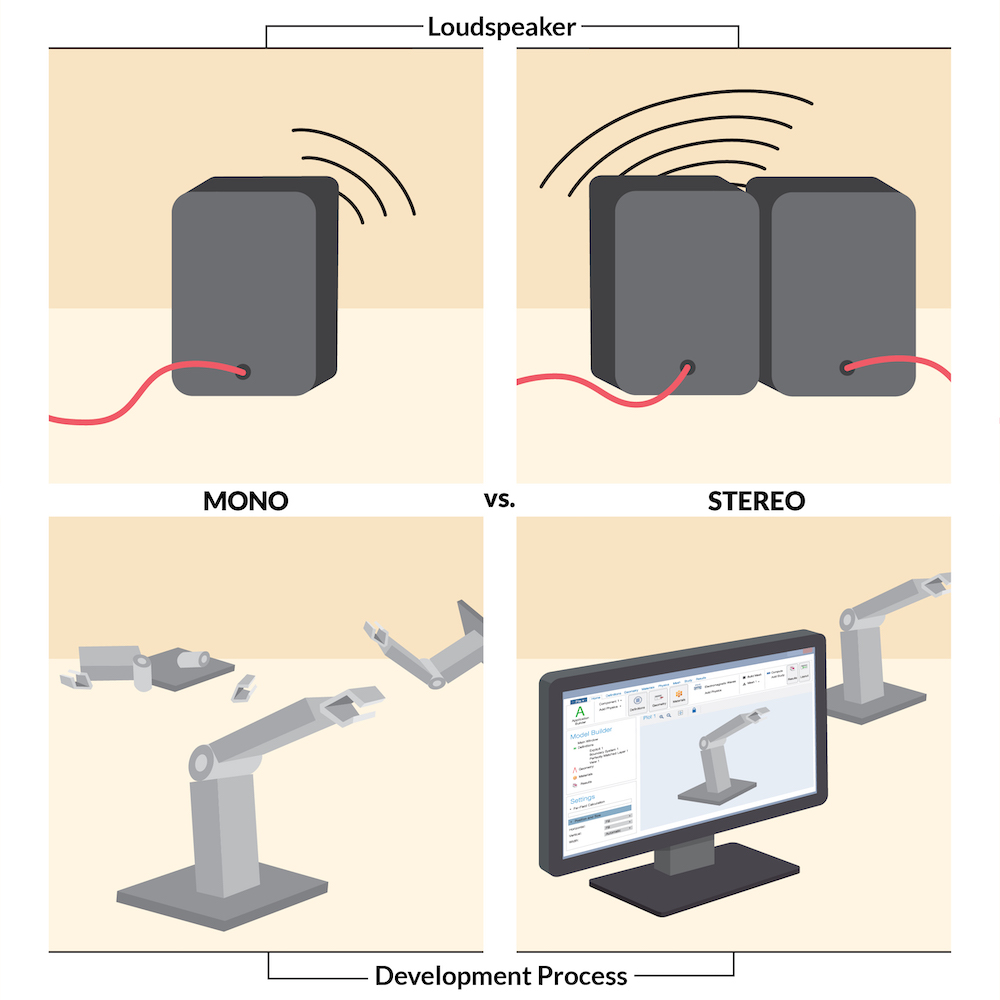 One way that the development team at Samsung Audio Lab took their cycle from “mono” to “stereo” was by adding a simulation engineer to their team. In 2014, Andri Bezzola came onboard as an engineer specializing in simulation and numerical analysis. Devantier describes the simulation engineer as “the glue that brings everybody together.”

We visited the Samsung Audio Lab to learn about how they use multiphysics simulation, modeling, and applications to develop loudspeakers and other audio products. Hear (and see!) all about it in this video…

As TVs are made thinner and thinner, the loudspeakers inside the TVs need to be designed smaller and smaller to fit. This stands in direct contrast to the conventional wisdom that great sound requires large speakers. (However, exceptional performance is just as important as minimal size.) How does Samsung balance these needs?

When developing a loudspeaker design, there are a few issues that can make or break the sound quality. Being new to audio, Andri had to learn about audio engineering and acoustics before he could apply his simulation expertise to solve these issues.

Has the sound of your loudspeaker ever sounded shrill, boomy, or tubby (think of how it sounds if you hold an empty paper towel roll up to your mouth and speak)? If so, the sound quality was degraded due to the speaker’s suboptimal frequency response.

A good frequency response produces a neutral, flat, and more enjoyable sound. To make sure the sound is up to par, the frequency response can be controlled through a combination of electronics, such as DSP, and the speaker’s design, which Bezzola uses simulation to analyze.

Have you ever watched a movie with a group of friends, and noticed how some people hear the television fine while others can hardly make out the dialog? This effect happens when the TV’s loudspeaker sprays sound into the room unevenly. This is called the radiation pattern or spatial response of the speaker. 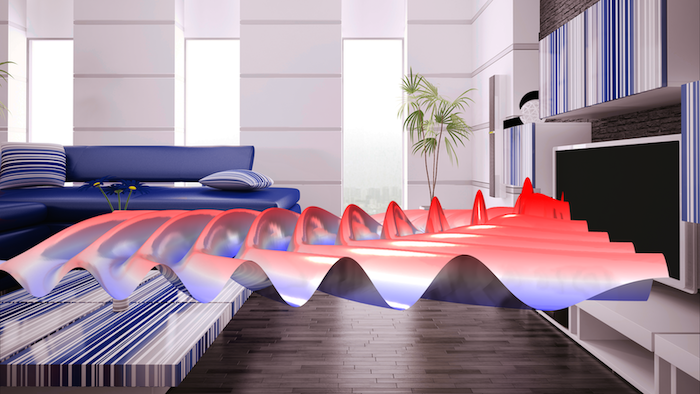 A loudspeaker should evenly spray sound into a room so that it doesn’t matter whether you’re sitting in an acoustic “sweet spot” to experience high-quality sound. Unlike frequency response, this factor can only be controlled through the design of the speaker’s mechanical parts, like waveguides. Bezzola meets this challenge by using simulation to not only determine the design of a waveguide, but where it should be placed for optimal sound distribution.

Nonlinearity in a loudspeaker can cause the sound to be too harsh and voices to sound raspy. Unfortunately, loudspeakers are inherently nonlinear.

When the voice coil moves inside of a loudspeaker, it interacts with a different magnetic field at every step and every position. To look into this nonlinear effect, Bezzola simulates different positions of the loudspeaker, assuming that the voice coil is fixed in that position and running a linear simulation on each (he calls this a “pseudo-nonlinear-type simulation”).

However, this tactic doesn’t give the full picture, because as the voice coil moves, it generates its own magnetic field that interacts with the magnetic field from the magnets. To account for this behavior, a fully coupled magnetic simulation is needed. “They take a lot longer to solve,” says Bezzola, “but they give us a better picture of how the nonlinearities play into each other.”

It sounds (pun intended) like a lot of work, but a well-balanced speaker provides a good sound with enveloping bass — an enjoyable listening experience.

Bezzola likes to think of the loudspeaker design workflow like a baseball game. Analytical solutions get Samsung into the ballpark: They are a good start, but are only approximations, since they are only valid for perfect shapes. Bezzola says: “We use numerical simulations to get on the field and start playing the game,” since they can analyze detailed components and operating scenarios. Finally, optimization enables Samsung to hit the home run and beat the competition. As Bezzola says, he is able to “eke out the final minutia of the simulation analyses to get the optimal sound.”

Stepping Up to Bat with Multiphysics Simulation

Using simulation, Bezzola analyzes a loudspeaker’s individual components (such as the waveguide, enclosure, and transducer) as well as the complete device. Some of his analyses focus on a single physics phenomenon, while others include multiphysics interactions, such as those between the speaker’s diaphragm (structure) and acoustic pressure (air).

As Bezzola says, “A loudspeaker is inherently a multiphysics apparatus. We have electromagnets generating a magnetic field, coupled to a voice coil that moves a structural membrane, which in turn causes acoustic waves to propagate through space.” The COMSOL Multiphysics® software is a multiphysics simulation tool for performing multicomponent and multiphysics analyses. “Combining the physics in COMSOL Multiphysics is seamless,” says Bezzola, “so you don’t have to worry about coupling.”

With multiple components and physics involved, Bezzola is often interested in multiple results parameters, looking at the acoustic response one day and the structural response the next. When postprocessing the results, Bezzola appreciates that the entire solution is automatically made available in COMSOL Multiphysics — you don’t have to define it before running the simulation.

Testing and Validation Send It Out of the Park

A successful multiphysics analysis is not the end of the development process. The Samsung Audio Lab has two anechoic chambers that the development team uses to test prototypes. The free-field chamber has foam wedges on all sides and is used to measure loudspeaker prototypes that are meant for almost any location away from walls, like a soundbar placed on a bookshelf or portable loudspeakers.

The other chamber has a solid wall on one side, which is used to mimic the environment of wall-mounted TVs. In these operating scenarios, the wall actually impacts the sound quality of the device, so testing the loudspeaker’s performance in this environment is important. 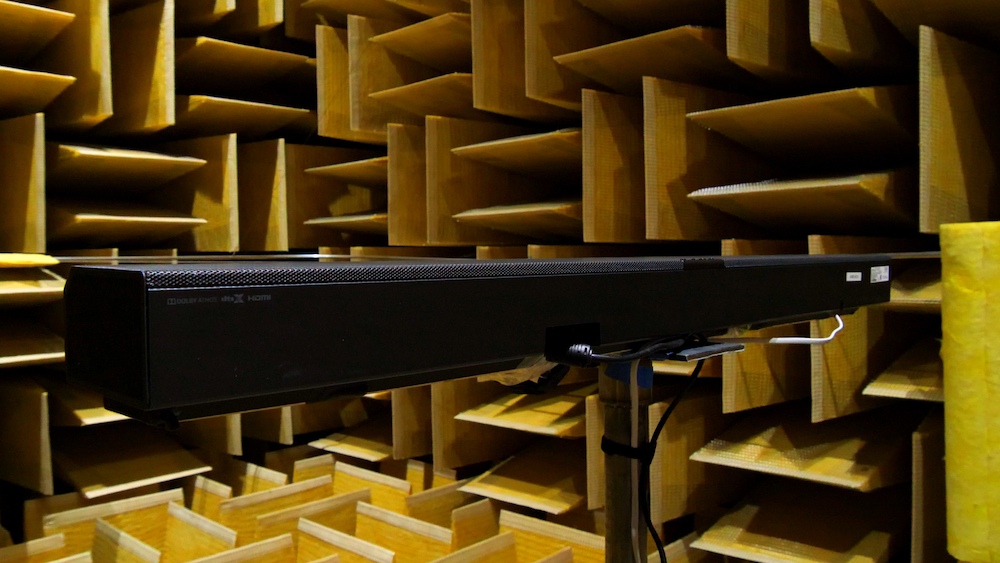 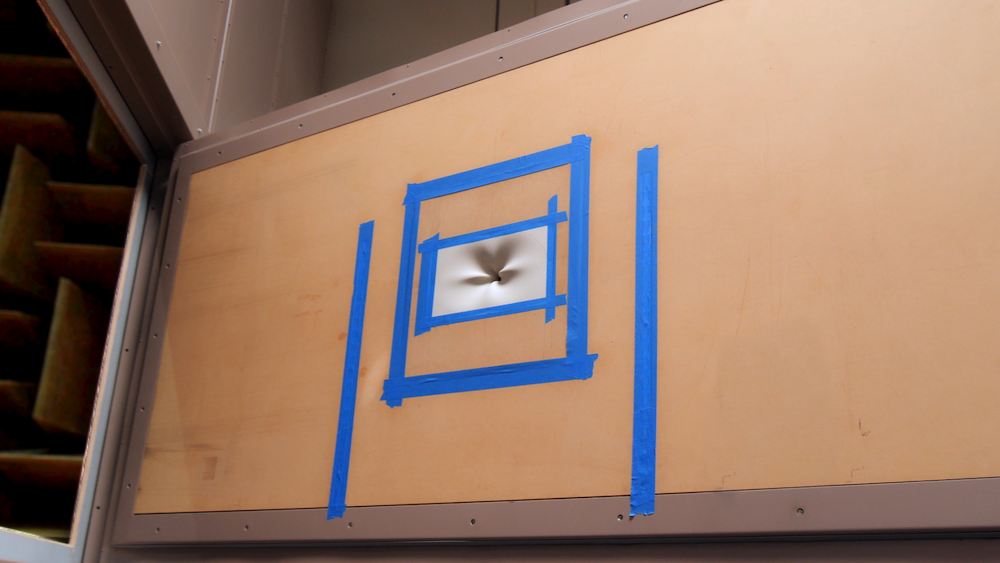 Left: A soundbar being tested in the free-field anechoic chamber. Right: The anechoic chamber with the solid wall is used to test loudspeakers meant to be mounted on walls. Photos taken at Samsung Audio Lab in California and published with permission from Samsung.

The anechoic chambers enable Bezzola to validate his simulation results, since both testing methods attempt to create idealized conditions. The chambers are also used to perform isolated analyses on a prototype and determine what effects are coming from the speaker versus the room.

Anechoic tests also determine how well a loudspeaker lights up a room with sound (which is controlled by its waveguide component). If you think of sound like light, then a loudspeaker can either be a light bulb or a flashlight. At low frequencies, a speaker will spread sound everywhere (like the glow of a light bulb, it is said to be omnidirectional), while at high frequencies, the speaker spreads the sound in a narrow beam (like a flashlight, it is said to have a high directivity). The anechoic chamber tests can show the transition between the speaker’s light bulb and flashlight behavior. 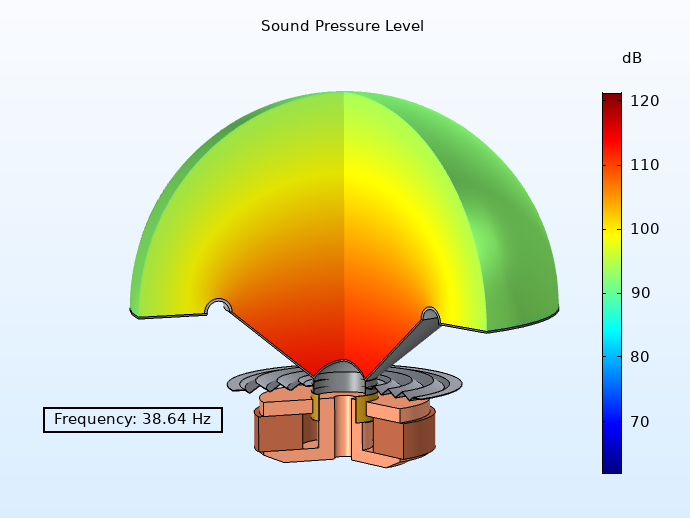 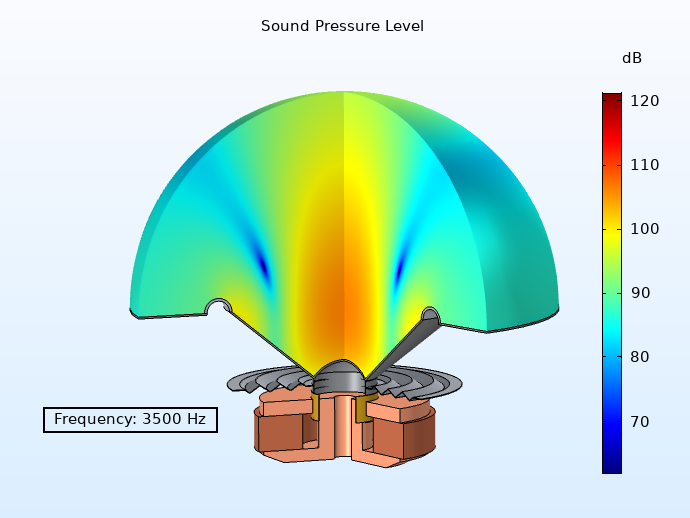 Over time, Bezzola recognized that transducer engineers on his team were repeatedly going to him for simulation analyses, and decided to do something about it. He used the Application Builder in COMSOL Multiphysics to build specialized simulation applications from his transducer models that the other engineers can use to run day-to-day calculations without having to go to Bezzola or wait for his help. 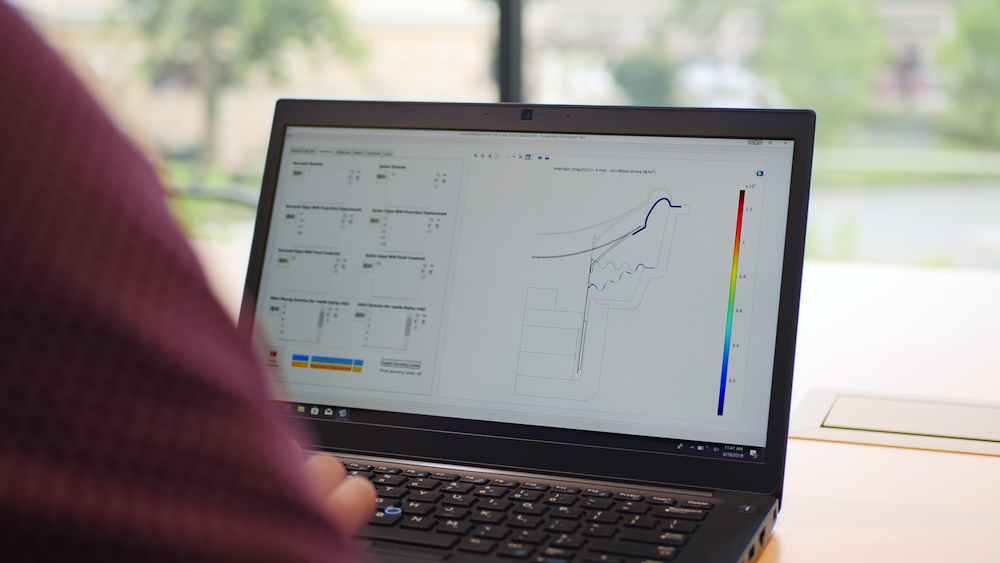 In the transducer applications, Bezzola only included a certain amount of buttons and inputs. This way, the engineers — most of whom do not have experience using traditional simulation software — only need to click a few preset items to get the results they need. Another benefit? Bezzola has more time to devote to new projects.

The systematic approach used at Samsung to design loudspeakers, soundbars, and other audio products combines modeling, optimization, prototyping, and testing — and also combines the expertise and experience of the audio, mechanical, and simulation engineers.

Introducing simulation into the loudspeaker design workflow helped Samsung optimize their core group of products faster and cheaper than with prototyping alone. “Compared to the traditional design cycle, we can really cut down a lot of time and prototypes by using simulations,” says Bezzola. From Devantier’s perspective, simulation leads to new ideas that the team wouldn’t have tried otherwise: “Samsung Audio Lab sees simulation as a way to move forward in the audio market.”

Performing a Shape and Topology Optimization of a Tesla Microvalve