What to Expect from COMSOL Multiphysics Version 5.1

Today marks the release of COMSOL Multiphysics version 5.1. The latest COMSOL software version brings you 20 demo apps and many new features and functionality updates to numerous products. Here’s what you can expect after downloading version 5.1.

With COMSOL Multiphysics simulation software, you can easily create models and turn them into apps that you can use yourself or distribute to colleagues, customers, students, and faculty. Are you ready to spread the power of simulation throughout your organization?

Of course you are — you’re the expert in your field; focus your time and energy on what you do best and let the others worry about making simple design changes. The Application Builder makes it easy for you to take your models and turn them into simplified apps with custom user interfaces (UI) depending on what you would like them to be used for. You could, for example, create an app that shows how antenna radiation characteristics and the aperture cross-polarization ratio change as you alter the antenna’s geometry. 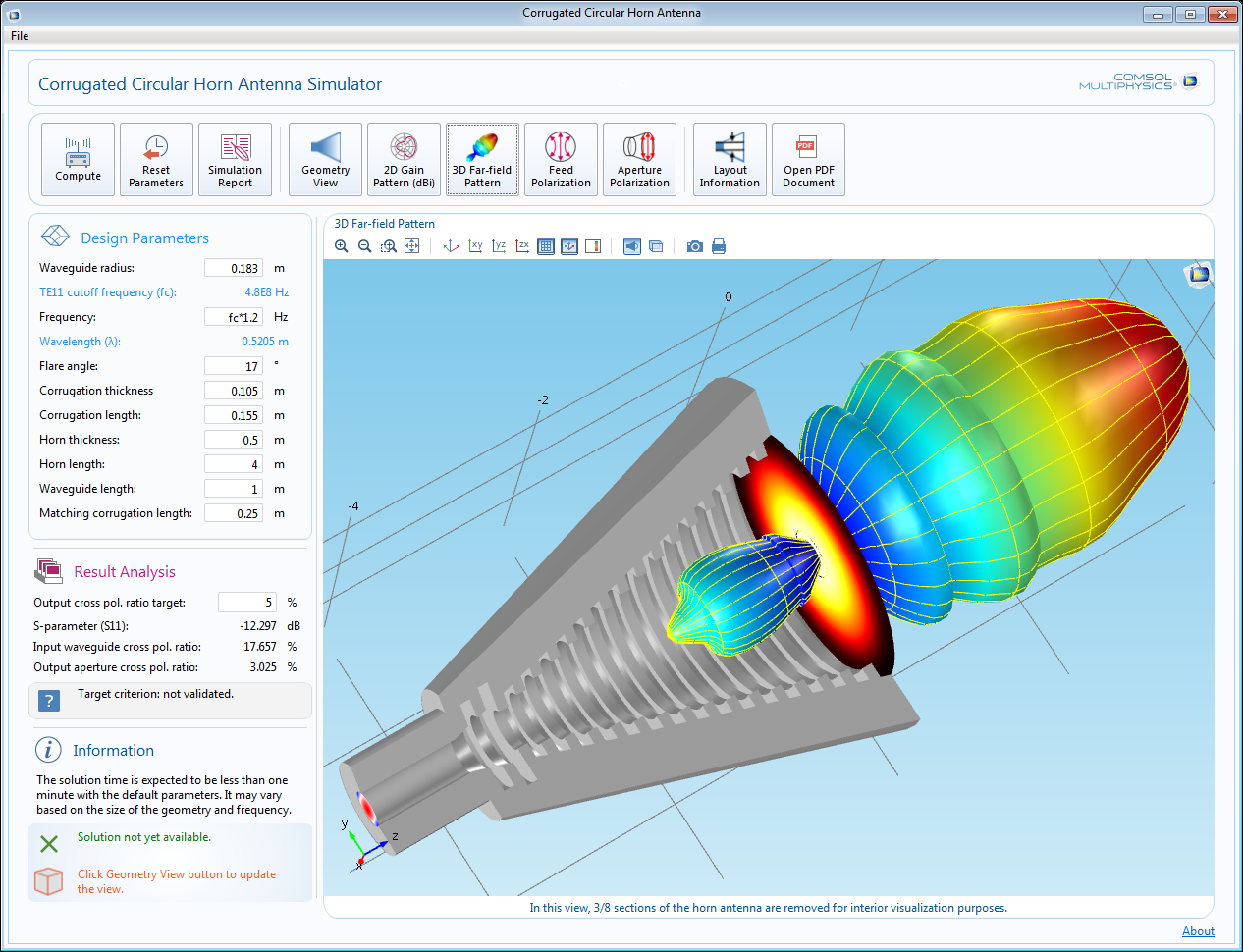 When creating the app UI, the possibilities are endless. There are tools (called Editors) that enable you to include animations and tables and generate reports detailing the results. You could also configure the app to automatically send an email when the simulation is complete, with the report as an attachment. If you find it beneficial, you may also embed accompanying documentation to further explain the application. Essentially, what you include in your app is up to you.

To help you get started, we are including 20 demo apps with COMSOL Multiphysics version 5.1, covering almost all of the modules in the product suite. I encourage you to take a look at the demos for inspiration, but don’t let them inhibit your own imagination; it’s time to get creative! Here are some of my favorite simulation apps that have been added to the Application Library (click on the images to view larger versions): 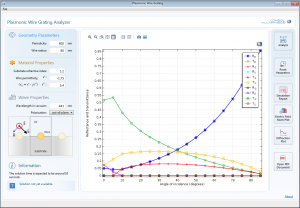 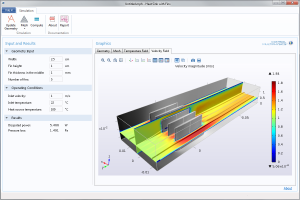 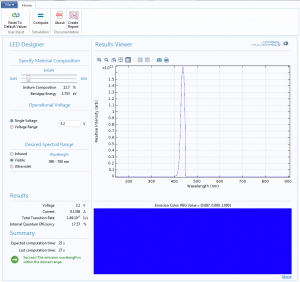 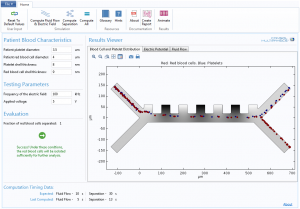 (Left) LED Designer app: You can alter the color of the LED by changing the material composition with a slider. Great for finding the design specs for that perfect color. (Right) Patient Blood Characteristics app: Analyze red blood cell separation to determine if the sample is pure enough for further analysis.

With COMSOL Server, you can now run apps on multiple computers. Instead of slowing down your main installation of COMSOL Server, several users can run satellite servers from various computers simultaneously. Further, the apps you are running on COMSOL Server can now be saved directly on the server so that you can return to each app in the state you left it — no need to download the app first. When browsing the Application Library, you now have three options for organizing the apps: grid, detailed, and list view. 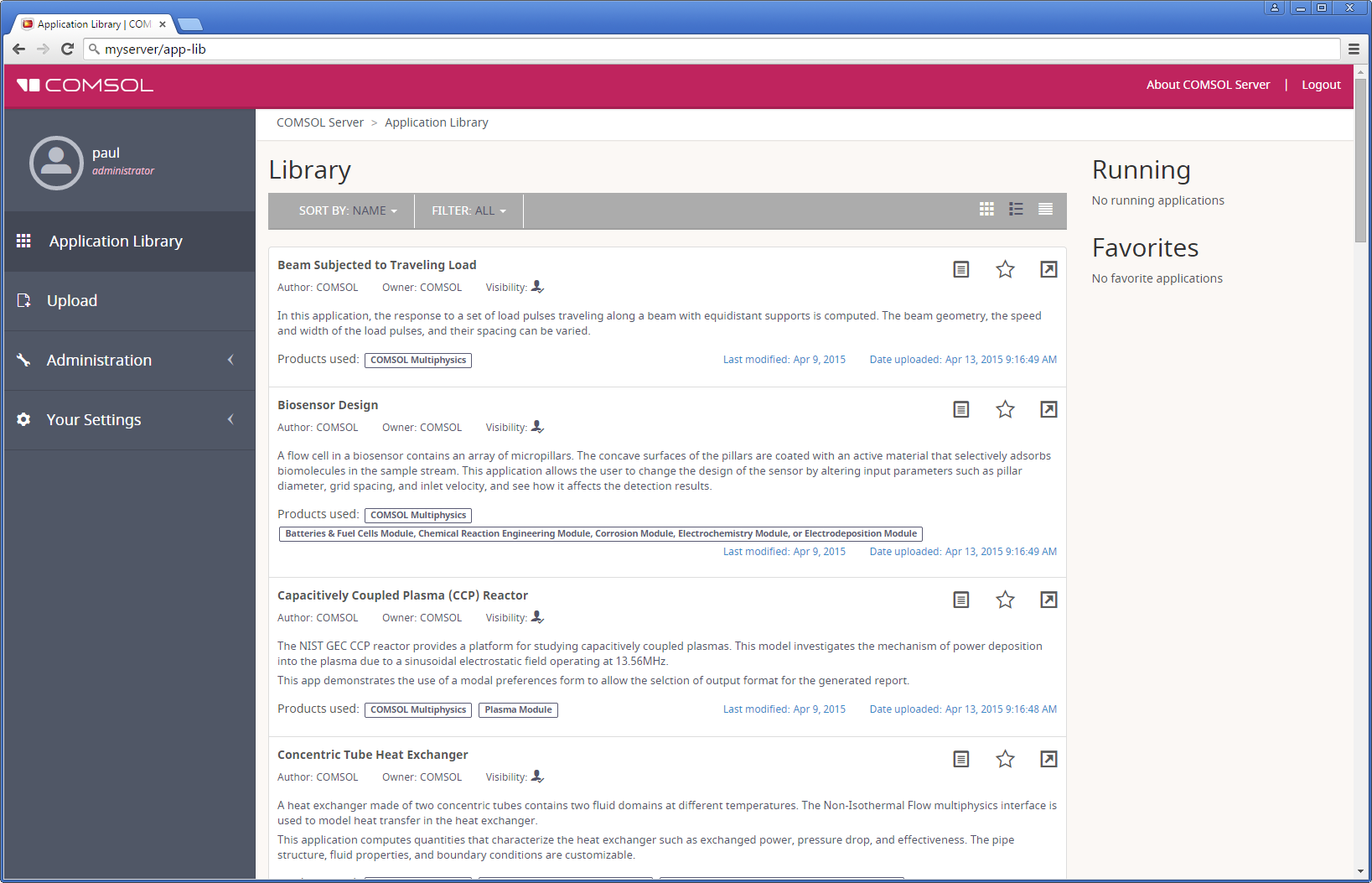 If you want to view any of the demos mentioned above, or any other COMSOL Multiphysics app or model, but you haven’t licensed the products used to create them, no worries. After upgrading your software, you will be able to open all models and apps regardless of what products are included in your license. You can even postprocess them or change or remove features from the non-licensed products and run them.

There’s more, but I won’t cover everything here. You can catch all of the COMSOL Desktop, COMSOL Server, and Application Builder updates on the COMSOL 5.1 Release Highlights page. Let’s move on to some other news that pertain to geometry, meshing, and visualization…

You will find a brand new type of library containing ready-to-use parametric geometry components, referred to as parts, for parametric models. We have added a Part Library to each of the following add-on products: 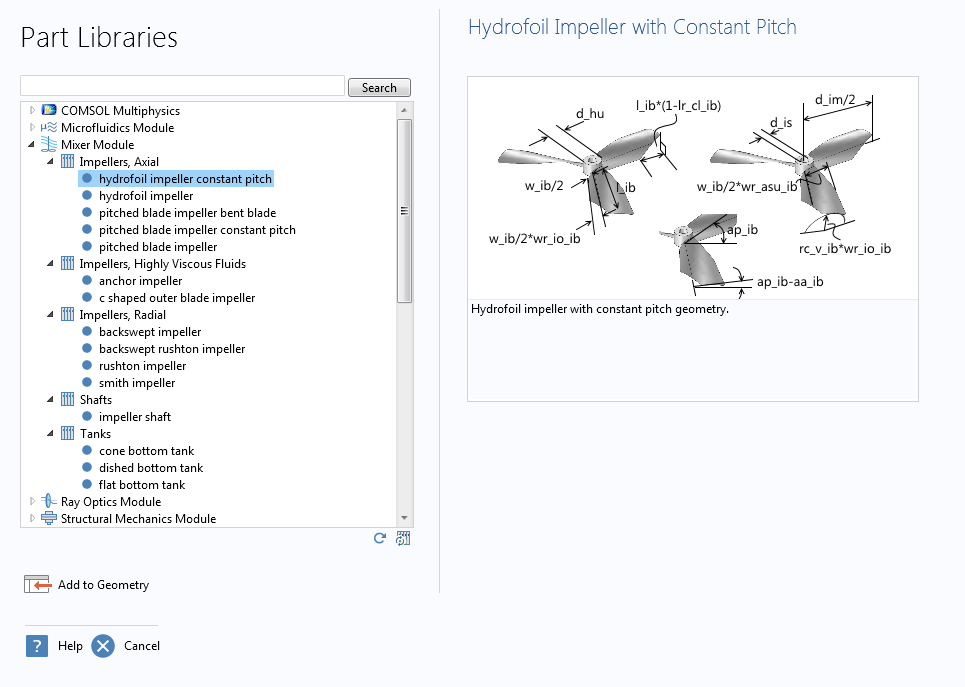 The Mixer Module Part Library showing a hydrofoil impeller and the different parameters you can access to create the impeller that fits your design and simulation.

The parts will save you a lot of time when setting up your apps and models, as you can start with a parameterized, pre-made geometry and edit as needed to fit the required size. Another great thing about using pre-built parts is that they come with predefined selections for easy integration into other designs such as mechanical contact surfaces and bolt pre-tension. If you want, you can also create your own part libraries in addition to those we have included.

After upgrading your software, you will also be able to both evaluate and visualize spatially varying fields and expressions located outside the mesh. (Prior to version 5.1, you were able to evaluate this, but not plot it.) This will be especially useful for simulating electromagnetic or acoustic wave far fields.

Note: We have made many more improvements to the core functionality of COMSOL Multiphysics than what I have mentioned here. Check out the COMSOL 5.1 Release Highlights page to learn more.

COMSOL Multiphysics version 5.1 introduces upgraded functionality and features across the product suite. While I will not cover everything here, I do want to share some of the highlights with you.

For all of you optical design engineers, we have incorporated a new material library containing 1,400 optical materials. You can access these materials from the Wave Optics Module and Ray Optics Module. The library includes inorganic, organic, glass, and miscellaneous materials. Glasses include those used for lenses, semiconductor materials, etc.

The AC/DC Module has seen improvements in multi-turn coils. There is new coil geometry analysis functionality for coils with non-constant cross sections. You will now be able to solve for all coils in one step. Furthermore, the voltage calculation is more accurate for 3D multi-turn coils in the frequency domain and you no longer need to tune the coil conductivity. 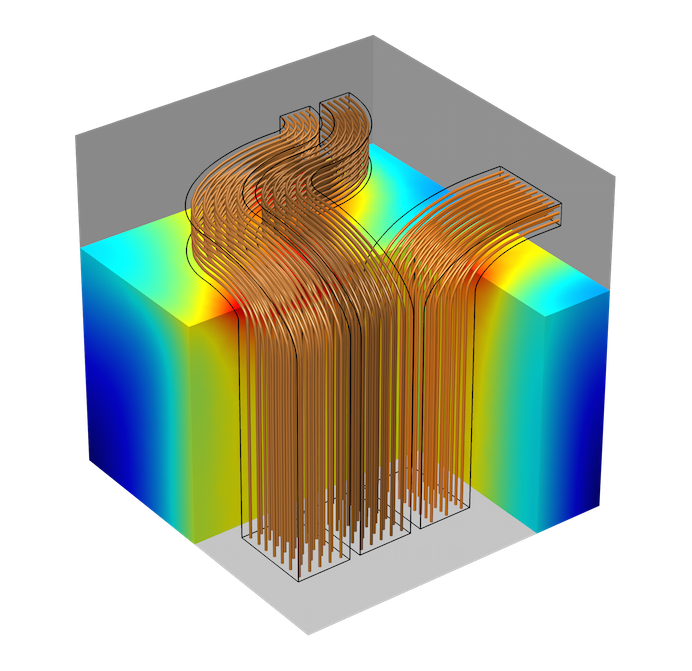 The RF Module brings you 14 new tutorial models and demo apps for antenna simulation (two of which are shown above). If you want to include surface roughness in your models, you can do so now via the Sawtooth or Snowball models.

You will now be able to model Marangoni convection with the Heat Transfer Module. This is relevant to anyone simulating welding, crystal growth, and the melting of metals by laser or electron beams. The Heat Transfer Module also includes new algebraic turbulence models, nonisothermal flow in porous domains, a Local Thermal Non-Equilibrium Multiphysics interface, and more. 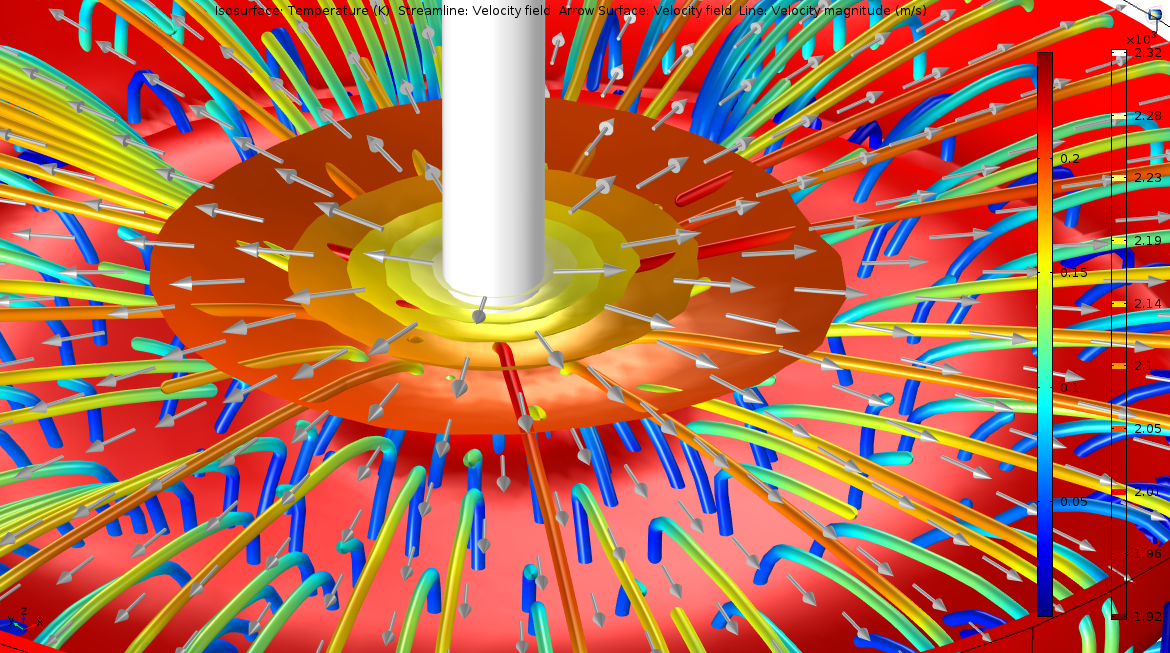 A laser beam heats a surface that leads to heat-induced flow described by the Marangoni effect.

We have made several improvements to tools used for modeling porous media flow. For instance, turbulent and porous media flow have been combined for the first time ever in COMSOL Multiphysics. Features for modeling infinite element domains and capillary pressure for two-phase Darcy’s law have also been added.

A new interface called the Euler-Euler Model, Turbulent Flow interface has been added for modeling turbulent dispersed two-phase flow. You can use this when modeling particles in a dispersed phase, such as dust in air. 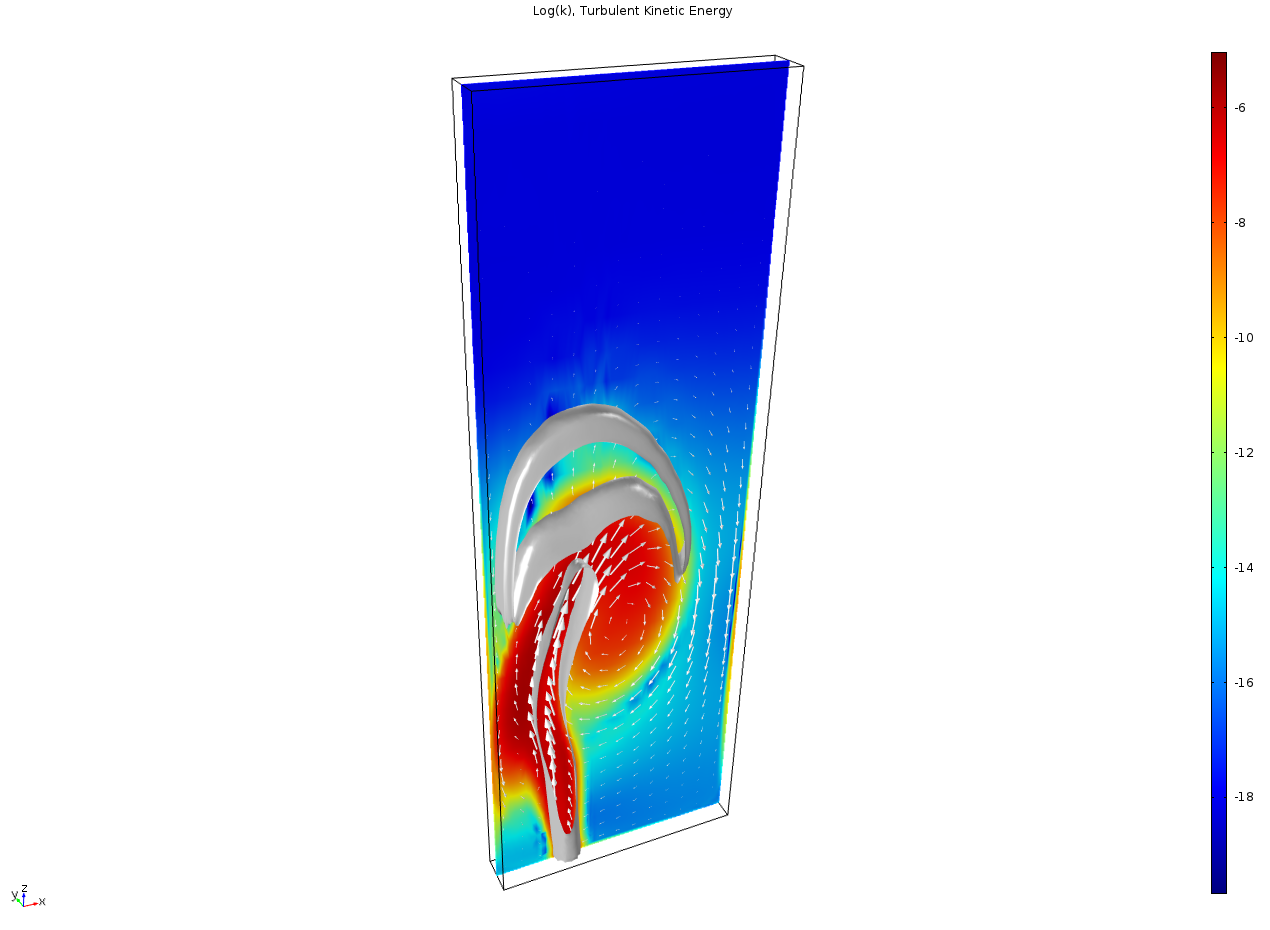 With version 5.1, you can model multiple species with the Free Molecular Flow interface in the Molecular Flow Module. The Pipe Flow Module now includes Y- and n-way pipe junctions as well as new pressure loss options for T-junctions.

We might see a shift in the type of batteries that are used in electric vehicles from the lithium-ion battery to a new lithium-air variety. To help battery designers stay ahead of the curve, we have created a lithium-air battery tutorial model, available with version 5.1.

The Multiscale 3D Packed Bed Reactor tutorial has been upgraded to include a plate with holes located at the inlet and realistic second-order reversible kinetics. It also considers the transient behavior of the reactor at start-up.

When modeling concentrated gas mixtures with the Reaction Engineering and Chemistry interfaces, you can now utilize a new gas mixture viscosity correlation. In the Transport of Concentrated Species interface, you now have access to a dusty gas model that uses the Knudsen diffusion transport mechanism.