We have introduced a new interface for simulating piezoelectric devices in version 5.0 of the COMSOL Multiphysics simulation software. This interface aims to achieve several things. In this blog post, I will explain what these things are and how you can use them.

The New Piezoelectric Interface, in a Nutshell

The piezoelectric modeling interface seeks to:

This will allow you to successfully simulate piezoelectric devices as well as easily extend the simulation by coupling it with any other physics.

You may already be familiar with the three different modules that can be used for simulating piezoelectric materials: 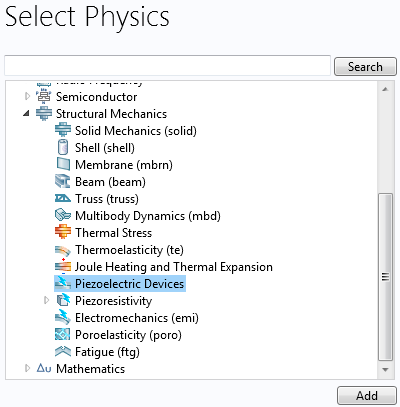 The Piezoelectric Devices interface is available in the list of structural mechanics physics interfaces. 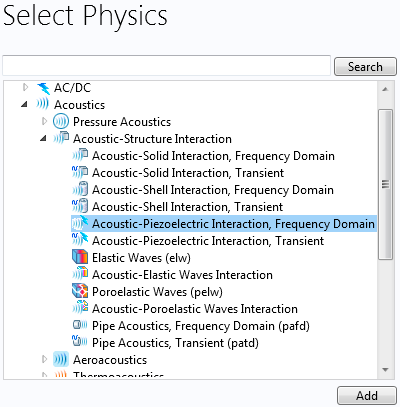 Let’s find out how these multiphysics interfaces are structured. 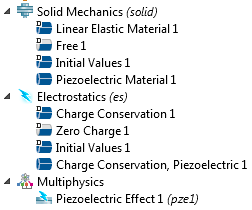 Part of the model tree showing the physics interfaces and multiphysics couplings that appear upon selecting the Piezoelectric Devices interface.

By default, all modeling domains are assumed to be made of piezoelectric material. If that is not the case, you can deselect the non-piezo structural domains from the branch Solid Mechanics > Piezoelectric Material. These domains then get automatically assigned to the Solid Mechanics > Linear Elastic Material branch. This process ensures that all parts of the geometry are marked as either piezoelectric or non-piezo structural materials and that nothing is accidentally left undefined.

If you are working with other material models that are available with the Nonlinear Structural Materials Module, such as hyperelasticity, you can add that as a branch under Solid Mechanics and assign the relevant parts of your modeling geometry to this branch. The Solid Mechanics node gives us full flexibility to set up a model that involves not only piezoelectric material but also linear and nonlinear structural materials. The best part is that if these materials are geometrically touching each other, the COMSOL software will automatically take care of displacement compatibility across them.

If some parts of the model are not solid at all, like an air gap, you can deselect them in the Solid Mechanics node.

From the Solid Mechanics node, you will also assign any sort of mechanical loads and constraints to the model.

The Electrostatics node allows you to group together all the information related to electrical inputs to the model. This would include, for example, any electrical boundary conditions such as voltage and charge sources. By default, any geometric domain that has been assigned to the Solid Mechanics > Piezoelectric Material branch also gets assigned to the Electrostatics > Charge Conservation, Piezoelectric branch. If you have any other dielectric materials in the model that are not piezoelectric, you could assign them to the Electrostatics > Charge Conservation branch.

Note: For an example of working with the Piezoelectric Devices interface, check out the tutorial on modeling a Piezoelectric Shear Actuated Beam.

It is also possible to add effects of damping or other material losses in dynamic simulations. You can do so by adding one or more of the following subnodes under the Solid Mechanics > Piezoelectric Material branch:

Damping and losses that can be added to a piezoelectric material.

Note: For an example of adding damping to piezoelectric models, check out the tutorial on modeling a Thin Film BAW Composite Resonator.

Additional damping also takes place due to the interaction between a piezoelectric device and its surroundings. This can be modeled in greater details using the Acoustic-Piezoelectric Interaction interfaces.

Upon selecting one of the Acoustic-Piezoelectric Interaction interfaces, you see the constituent physics: Pressure Acoustics, Solid Mechanics and Electrostatics. You also see the Acoustic-Structure Boundary and Piezoelectric Effect branches listed under the Multiphysics node. 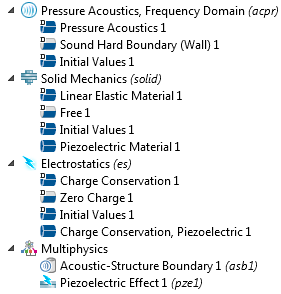 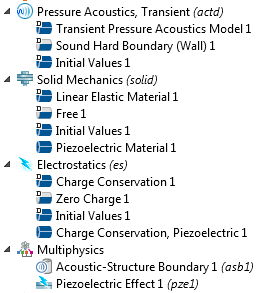 Since COMSOL Multiphysics cannot know a priori which parts of the modeling geometry belong to the fluid domain and which ones are solids, you are expected to provide that information by deselecting the solid domains from the Pressure Acoustics, Frequency Domain (or Pressure Acoustics, Transient) branch and deselecting the fluid domains from the Solid Mechanics and Electrostatics branches.

Once you do that, the boundaries at the interface between the solid and fluid domains are detected and assigned to the Multiphysics > Acoustic-Structure Boundary branch. This branch controls the coupling between the Pressure Acoustics and Solid Mechanics physics interfaces. It does so by considering the acoustic pressure of the fluid to be acting as a mechanical load on the solid surfaces, while the component of the acceleration vector that is normal (perpendicular) to the same surfaces acts as a sound source that produces pressure waves in the fluid.

Note: For an example of Acoustic-Piezoelectric Interaction, check out the tutorial on modeling a Tonpilz Transducer.

The transparency in the workflow as discussed above also paves the way for adding more physics and creating your own multiphysics couplings.

For example, let’s say there is some heat source within your piezoelectric device that produces nonuniform temperature distribution within the device. In order to model this, you can add another physics interface called Heat Transfer in Solids in the model tree and prescribe appropriate heat sources and sinks to find out the temperature profile. You could then add a Thermal Expansion branch under the Multiphysics node to compute additional strains in different parts of the device as a result of the temperature variation.

Part of the model tree showing the physics interfaces and multiphysics couplings that you can use to combine piezoelectric modeling with thermal expansion and temperature-dependent material properties. 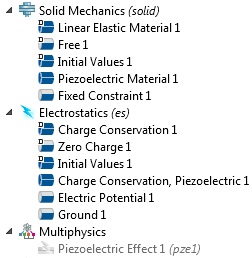 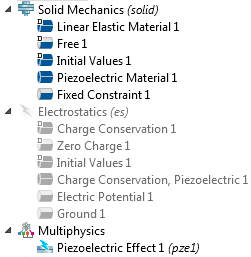 You could also start by adding only one of the constituent physics, say Solid Mechanics, and after performing some initial structural analysis, go ahead and add the Electrostatics physics interface to the model tree once you are ready to add the effect of a piezoelectric material.

In a similar fashion, you can continue to add more physics interfaces and multiphysics couplings to your model based on your needs.

To learn more about modeling piezoelectric devices in the COMSOL software environment, you are encouraged to refer to these resources:

A Simulation App for Helical Spring Design and Analysis

What Is the Curl Element (and Why Is It Used)?

How to Numerically Simplify Your Periodic RF Models

hi, I can’t find a way for adding pyroelectricity to my model. is it possible in comsol? I need to simulate electrocaloric effect.

Hi, would you please inform me how can i model a cantilever beam partially immersed in liquid using comsol multi physics software?

For questions related to your modeling, please contact our Support team.